skip to main | skip to sidebar

Now that is shameful

I can't believe I have not blogged for 2 years, I am sure I must have had something to say in that time. Well...maybe not :)
I am getting claustrophobic around here. Kelly planted corn on most of the farm. There is 8 ft tall corn on 2 sides of the house, it's like living in a jungle. Found sugar ants in the sugar today, maybe that's why those little devils are called sugar ants? It's not a big problem, we only keep sugar around to feed the hummingbirds.
Posted by Azimuth at 8:45 PM 1 comment: 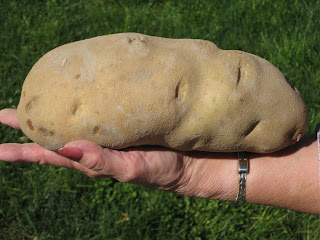 Too bad I have to watch my carbs. Jerry has a whole pile of taters just like this one. It's nice to be close to the source :)

First day of fall and I just pulled the a/c units out of the windows and stored them in the shop. I am tired of the hot weather, but don't really look forward to the cold. Why can't autumn last about 8 months?
Posted by Azimuth at 1:35 PM 1 comment:

Sorry, I don't do Windows 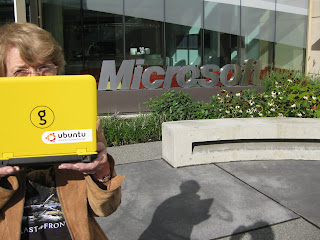 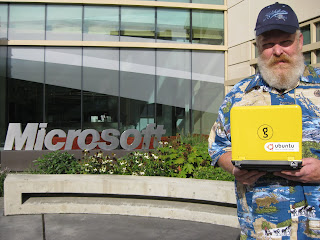 While we were in Redmond Sunday, I couldn't resist a photo opportunity with my Linux netbook.
Charlotte, who uses Linux Mint, wanted her picture too. I will say, Microsoft has a beautiful and large campus. They are living well off their monopoly practices.
Posted by Azimuth at 9:44 AM 1 comment:

I guess I am like an old work horse. I get my nose pointed toward the barn and nothing better get in my way. We were 11 hrs on the road coming home. We hit road construction on I-90 that accounts for an hour of that and made more coffee stops than I normally would have. I didn't feel great and the time in the coffee shops helped keep me going. I loved the trip, but there is truely "no place like home".
I need to dig thru the video I shot and see if there are any clips that might be interesting enough to post on the blog. Check back in the coming days and see if I found anything.
Posted by Azimuth at 10:43 AM No comments:

We are stopped at a Denny's in Pendleton. We decided it's time to go home. A person can only stand so much fun. I got spoiled by ship's food, only the prawns I had at the Coho Cafe last night was comparable. The Burger King where we had lunch and the fare here at Denny's is just not up to my new standards :)
I am not feeling great and I don't think I'll make all the way home tonight. Maybe a stop in La Grande?
Posted by Azimuth at 4:59 PM No comments: 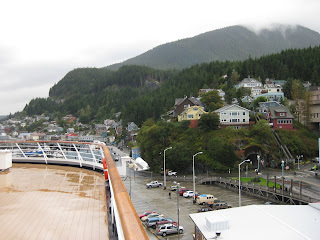 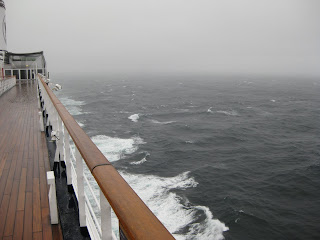 I liked Ketchikan and Sitka both better than Juneau. I wish we would have had more time for Ketchikan, we really cut it close getting back onboard. We were having fish and chips at Salmon Landing and ate them entirely too fast to really savor the quality, dang good even on a tight schedule. The "duck" ride was different, an hour and a half of sightseeing with a comedy duo. We did get to see a lot of the city and harbor as well as local history.
Lots of rough seas getting to Victoria and we got there late. They had canceled our excursion there and we could see the town was quite a ways from the pier, so we just stayed aboard and enjoyed the ship not moving.
We found rain and heavy overcast when we reached Seattle. When we reached our car it got worse, it had been broken into. nothing to steal was in it, but a $188 passenger window was smashed to for them to find that out. Bummer! We have spent the morning getting a side window installed. We are at a nice motel in Redmond waiting to go out to dinner with friends. We have lots of internet here, Ya!
Posted by Azimuth at 3:17 PM 2 comments: